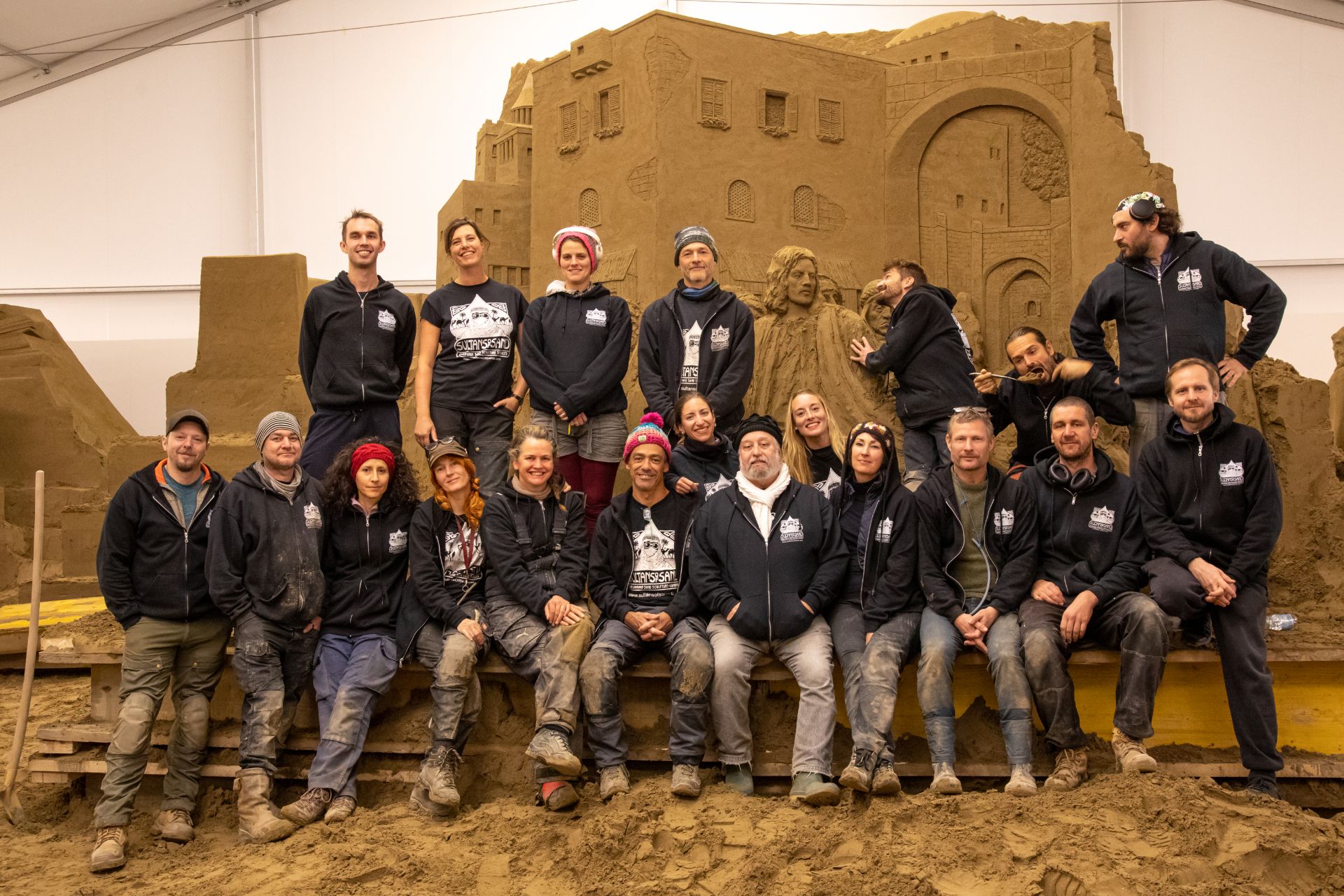 Born in 1958 in New Smyrna Beach, Florida, he is the artistic director and owner of “Sultans Of Sand Worldwide”.
Learn the art of sand sculpting from his grandfather and create works on a professional level since the 1980s. He has won many awards in international competitions around the world.
Since 1998 he has been the artistic director of the Jesolo sand sculpture exhibitions. Of all the places where he works, Jesolo is the one he prefers, so much that he defines it as his second home.
In 2018 he directed the team that created the Nativity in St. Peter's Square, which the Municipality of Jesolo donated to Pope Francis. 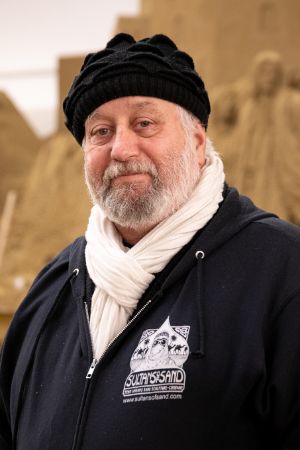 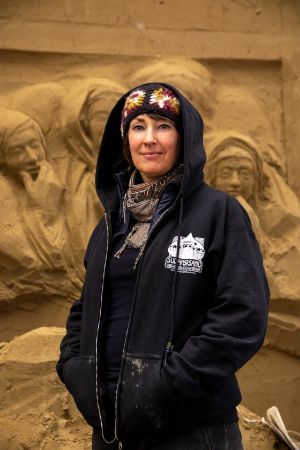 Helena studied sculpture at the prestigious Rietveld Art Academy in Amsterdam, she herself admits that she has never considered sand sculpture. Two years after graduation, around 2000, she was contacted to create a sand sculpture for a retirement home for sailors. Since then, Helena has begun to specialize in this particular material. In 2002 she won the first prize at a sand sculpture festival in Italy. Since then Helena has continued to win awards for both sand and ice sculptures.

This professional sculptor, of British origin, now lives in Holland, where he began his career as a sand sculptor in 1996, founding the group Sandaholics Anonymous. He creates sculptures with the most varied materials, including snow, ice, bricks, cheese and chocolate. He has participated in the events organized in Jesolo since 2002. 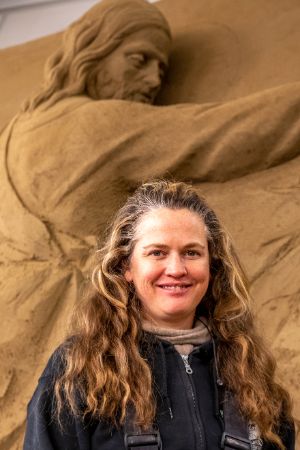 A graduate of St Joost University of Art, this Dutch sculptress is an expert at sculpting various materials, including sand, snow, ice. Her work as a professional sculptor allows her to travel the world and work as part of a team, thereby learning various sculpting techniques from other artists, in a continuous exchange of experience and skills.

After studying interior design in Gent, Hanneke began sculpting different materials from 2002 gradually expanding her scope of work. She is a passionate modeler of all kinds of materials and has traveled the world to show her work and her skills in many places.
She has recently begun to explore the world of graphics as well and has become a versatile illustrator. 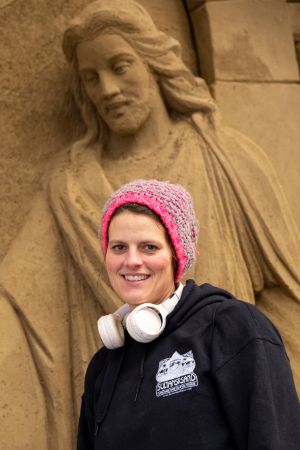 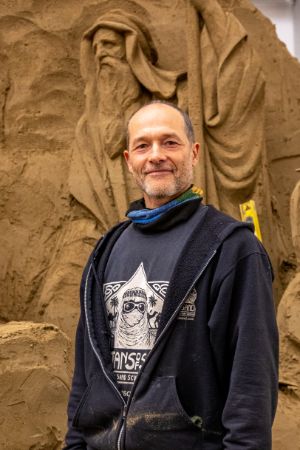 This Canadian-born sculptor began sculpting sand about 16 years ago. Working with this material has allowed him to meet many other artists and to travel the world, participating in exhibitions and competitions held each year in various countries.
He is mostly a self-taught artist and has learned much from his colleagues.

After studying art in Moscow, Ilya became a jewellery designer. At the same time, he also specialized in ice sculpting. He left his work as a jeweller to devote himself to the study of sculpture at the Moscow State Academic Art Institute in Surikov and is now one of the most popular sand artists in the world. 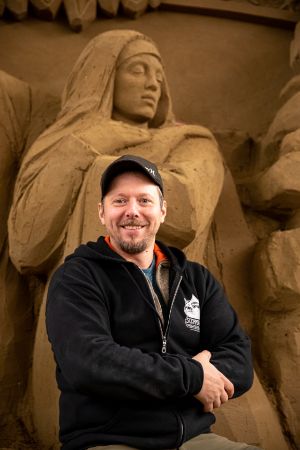 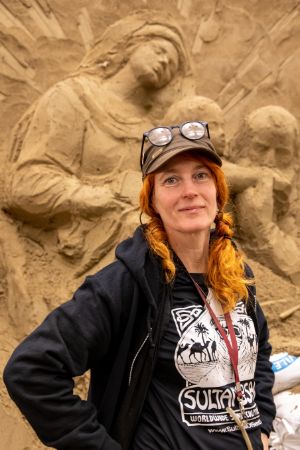 Marielle cultivated a passion for drawing, sculpture and painting from an early age, which laid the foundation for her later work as a sculptor and painter. She has always worked with various materials, but in 2006 she approached the art of sand sculpting, finding it a fascinating medium for expressing her passions and developing as an artist.

Sculptor and set designer. A graduate in scenography at the Academy of Fine Arts in Bologna, she devoted herself to theatrical set design, working in opera and drama productions, experimental theatre and cinema, for which she created backdrops, pictorial decorations and sculptures in various materials. This activity led her to work in several theatres, film studios and theme parks throughout Italy. In 2004, she began to work with sand and after some experiences in Italy, she entered the international competition and festival circuit, where she has earned awards and recognition. She has subsequently tried her hand at working with other materials, such as ice and snow and vegetable carving, as well as body painting. 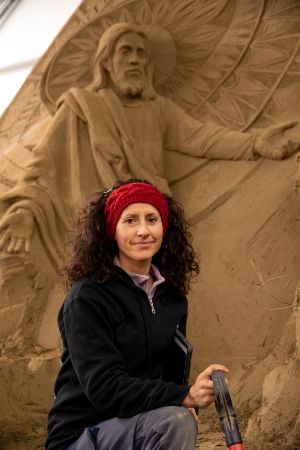 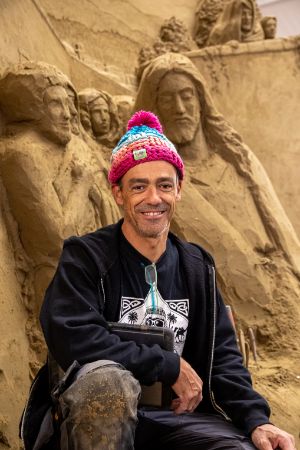 Pedro was born in 1970 in Lisbon, where he studied sculpture and photography. His artistic career began in the early 1990s and he has since exhibited his works in various events. He has worked in silver, photography, design and sculpture, using various materials. He has also worked with other artists, sculpting and developing skills through the use of different techniques. Over the past 10 years, he has worked with sand at major festivals around the world.

Born in 1973 in the Czech Republic, he is a graphic designer and art professor. As a sculptor he began working with sand in 1997 and currently participates in the most prestigious events in this field organized around the world.
In recent years he has also started working with more traditional materials such as wood, concrete and iron. Between 2010 and 2013 he was the artistic director of the Golden Sand Festival in Bulgaria.
In 2018 he was part of the team that created the Nativity in St. Peter's Square, a gift from the Municipality of Jesolo to Pope Francis. 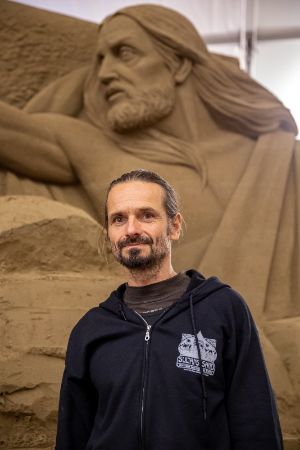 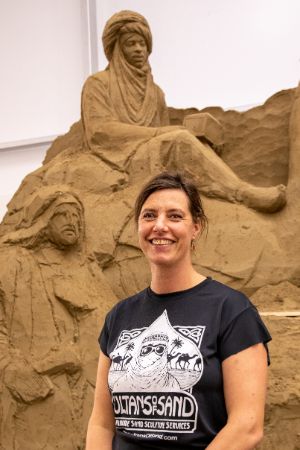 This Dutch artist has been working with sand since 2003, when she decided to pursue her passion for sculpture. She also likes working with other materials, such as ice, snow and concrete. After completing her university studies in Biology, she devoted herself full-time to sculpture, participating in projects, events and competitions around the world.
In 2018 he was part of the team that created the Nativity in St. Peter's Square, a gift from the Municipality of Jesolo to Pope Francis.

Peter Busch is a University professor. He makes sand sculptures as a hobby. For his work with sand, he has traveled to Asia, America, Spain and other countries.
Peter is a founding member of the group that first promoted sand sculpture as an artistic expression in Denmark. He is also passionate about chess and badminton. 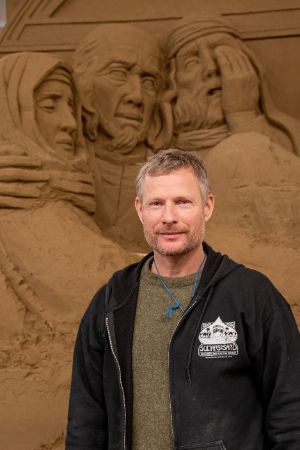 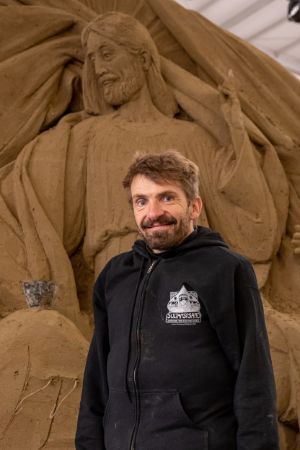 Enguerrand has always felt attracted to space design. Initially fascinated by architecture and historical heritage, he gradually opened up to the art of sculpture thanks to his university training as an art historian and archaeologist. He discovered the art of sculpting on sand, ice and snow in 1999. Since then, he has traveled the world in the company of colleagues who have quickly become his best friends.
Enguerrand is known for his multidisciplinary skills (illustrative representations, abstractions, landscape, etc.) and for his desire to experiment (high reliefs, false perspective effects, etc.).
He also organized and directed several small sculpture events in Belgium.

Jakub began sculpting sand on the beaches of southern Spain during a trip in 2003. In 2005 he participated in his first international sand sculpture festival in Portugal. He creates sand sculptures for world events, winning numerous awards in international competitions. 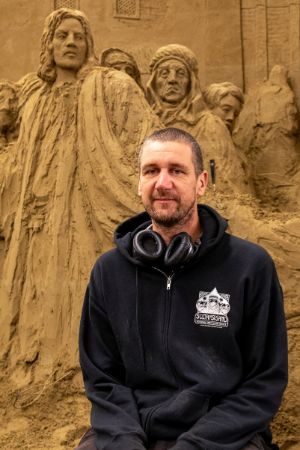